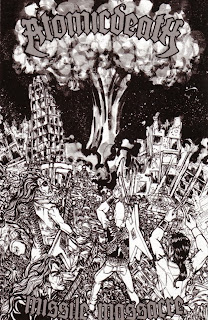 Four songs, but I wish this tape lasted for an hour. Crushing apocalypse crust from Malaysia courtesy of ATOMICDEATH, if this were from the US or Europe then I have no doubt people's heads would be spinning. SLAYER drenched riffs, but slowed down just enough so that every last drop of the power can be enjoyed...I'm trying to avoid using the word "epic," but I don't think it's possible. The singer has a slightly higher, 80s thrash metal approach (think first SODOM LP), and combined with the twin axe attack and heavy double bass heavy surges, you'll be sold on ATOMICDEATH before "Bestial Pain" is over. For a domestic reference, this tape can sit right alongside HELLSHOCK and STORMCROW, and I think that a full length from ATOMICDEATH could easily put them in the ranks of the elite. Missile Massacre comes to us from the fine folks at Black Konflik, well worth checking out for your personal copy, in addition to tapes from CHAOS DESTROY, WARDOGS and others. Get amongst this shit. 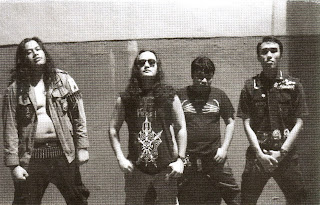 This is killer! And yes, I would party with these dudes.

Picked this up when I was in Japan. Awesome tape. Thanks for posting Robert. (This is Kevin from Icon Gallery. What's up.)

This sounds wonderful. Look at that cover! Mushroom clouds and mutant crusties? Sold.

Thanks man, great crusty thrash band. The only place where i found this demo on the internet. Greetings from Defunción Sistemática