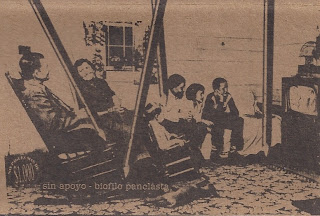 BIOFILO PANCLASTA are a freight train. Ramming speed male/female fronted crust, a dozen songs fly by in less than eight minutes and the intensity level starts at maximum and only increases. SIN APOYO rip through five tunes, and while their attack may be slightly more restrained it is every bit as intense. A touch more melody within the same confines of blistering Spanish language hardcore (and they throw in a few solos too). Both bands hail from Chile, and this tape was released in 2002, you shouldn't need to know anything else.