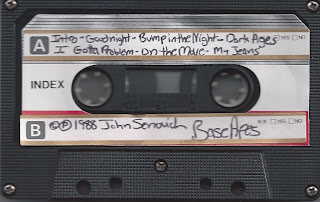 This is small town 1980s. Waynesville, Missouri isn't quite the middle of nowhere - the famous Route 66 cruises leisurely through the dated downtown, and Fort Leonard Wood (named for my Great-Grandfather-in-law) is a mere 10 miles down the road which means that young recruits and grizzled vets often use Waynesville as their playground. St. Louis lies a little more than two hours to the east, leaving the town of just a few thousand pretty much to its own devices socially. So what do you do in 1987 if you are a frustrated high school hessian in Waynesville, obsessed with GG ALLIN and MISFITS, coveted DEAD KENNEDYS and METALLICA records sharing shelf space in your parents' basement, sneaking tall cans of Bud Lite in drainage ditches dreaming of an escape? The answer is simple: you start a band. BASE APES cranked out a healthy handful of tapes during their four year run (which not coincidentally coincided with the high school tenure of the members), bedroom heavy metal with punk teeth put awkwardly to 4-track with the help of beer and adolescent frustration. Instrumentals like the 6+ minute "On The Move" are simply head scratchers, but the majority of this tape (which features some but not all of the tracks from the first BASE APES demo from 1988) is classic small town angst - a vehicle for inside jokes and a shared experience, driven by a drum machine and screaming guitar solos. Several more tapes followed (fortunately for the modern day researcher, founder Sambone is a graphic designer and has put the band's entire story online), and the band continued their assault on small town existence until 1990. BASE APES aren't going to change your life, but they certainly shaped the teenage years of the members, and I can only imagine how much richer my world would have been as a 15 year old had I known that such a band were possible in the midst of such cultural isolation.

Killer! Thanks for sharing! Looks like the tape is sold out - or else I'd be scrambling to add this one to my stack.