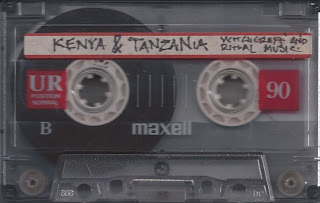 So I got this big ass tub of live tapes from Buzz a couple of weeks ago - a a hundred or so live recordings of shows from Mission Records from the first year or two of the new millennium. Killer stuff, most of which will appear on Escape Is Terminal eventually (although the first tape from that stash that I posted was from the CW Saloon...because who can resist a recording of the first LUDICRA show?) along with all of your other favorite live gems. But in addition to those live tapes (and a pile of unmarked tapes that it will take a miracle to identify) was this one marked KENYA & TANZANIA: WITCHCRAFT AND RITUAL MUSIC. This was on the flip side of the LUDICRA tape so I didn't have to look too hard, but it seemed destined for a Friday visit to Terminal Escape before I even pressed play. So here you go:

KENYA & TANZANIA: WITCHCRAFT AND RITUAL MUSIC
Through the power of technology, I determined that these songs are taken from a 1975 vinyl release of field recordings made by David Fanshawe. By "technology," I mean that I converted the cassette to a series of mp3s, then I held my phone up to the computer speakers and turned on the Shazam app. African ritual field recordings? Yeah, there's an app for that. And by "David Fanshawe," I mean an English dude who basically spent his life recording some cool ass shit from all over the world and composing and recording some weird sounds. He died in 2010, but after getting lost in his on line legacy for the past hour, he seems like a pretty amazing chap.
Posted by the wizard at 4:30 AM

Email ThisBlogThis!Share to TwitterShare to FacebookShare to Pinterest
Labels: Africa

I downloaded this once while I was searching for south african musicial groups and namibian also. Pretty wicked stuff. Id love to get an original tape of this if its available

Is it possible for you to repost this? Would love that!