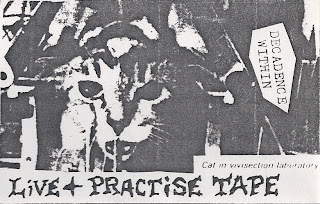 There's more history here if you like, but Ledbury's DECADENCE WITHIN kicked around in various forms from the mid '80s to the mid '90s and released a handful of quality UK anarcho thrash/punk records. Later lineups were definitely on the more metallic end of the spectrum (it seems to be the direction punks turn when they learn how to play...which probably says something about those of us who don't go down that road), but this 1985 slab pre-dates their vinyl releases and is brilliant raw UK punk. A rehearsal tape from a band who could have fit in on the Spiderleg or Bluurg rosters a few years earlier, brilliant bass lines straight out of the SUBHUMANS playbook and insistent youthful vocals with an honesty that age can't quite seem to duplicate. This recording is pretty blown out, but the songs are there, and anyone who wants more can enjoy the other side at Escape Is Terminal. It's live, it sounds a bit better than the rehearsal, the version of "Public Blood" is a total creamer, and the show made the newspaper after a big ass brawl (which is on the tape, of course).

PRACTISE TAPE
Posted by the wizard at 4:30 AM

thanks but is it me or the link to the 'practise' is missing???

thanks but is it me or the link to the 'practise' is missing?

Sweet.
I must admit that I much prefer early DW to their later period. When they had two vocalists they were not so far from Karma Sutra and the Sears actually.