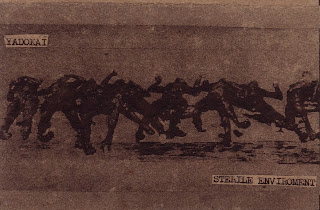 This ten minute blast cam out about six months ago, and when I saw them last week I was reminded that I've been meaning to share it with those of you not lucky enough to live close enough to San Francisco to catch one of the live shows. Those live shows, though sporadic, are a thing of beauty...really ugly beauty. An online description of the band, made mostly in jest, said that YADOKAI were "GAUZE meets BCT Tapes meets HEROIN," and that fukkn nails it. The unrelenting hardcore fury heralded by BCT bands is packed into these five songs until they are overflowing, and classic Japanese hardcore song structure and riff construction makes the lofty GAUZE comparison entirely justified. Throw in the chaotic recording and occasional forays into noise indulgent but brief noise, and a vibe akin to '90s bands like HEROIN and MOHINDER starts to develop within the full on hardcore assault...it's almost a relief when "No Motivation" ends and you can take a breath. The DIY rehearsal recording captures every fucking ounce of the power, and the distortion envelops every element of the band so that vocals and guitars constantly battle for your attention, taking turns at the forefront while the bass and drums hold the operation steady. Perfect tones hide underneath the chaos, and one song bleeds right into the next, allowing for no respite until the demo is finished (like I said, the end of the tape is almost a relief). YADOKAI feature members of Bay Area bands ECOLI, NIGHTSTICK JUSTICE, FACE THE RAIL and the guitarist from VACCUUM/MORPHEME...but that pedigree is just to get you to download the shit, because Sterile Environment stands easily on it's own as one of the best slabs to come out of the bay in a long time.

hey could you post some uk82 type stuff it's been a while since you've posted anything like that.

This is so fucking noisy I can barely tell what's going on. Needs more listens, I guess.

LISTEN MORE!! make maximum volume and hold the headphones close----focus your attention through the chaos and LIVE!!!

This shit is so raw and rippin'. I need to see this band live.

Improper use of apostrophe. Twice. No wonder you were anonymous.

What Ratt said. This tape smokes!

Fuck Yeah. any band that sounds like heroin is a winner.