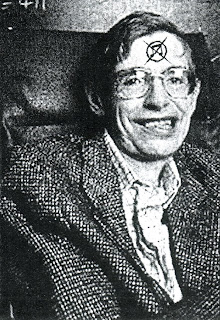 Stephen Hawking is one of the most brilliant scientific minds of the 20th century, he is also paralyzed and speaks through a computer modulated DTC01 voice synthesizer. Stephen Hawking is the title of one of the many cassette only releases by Australia's OCCULT BLOOD, and it features disconcerting distorted noise. OCCULT BLOOD's vocalist was here this past week, and as I watched him drink beer illegally in the front seat of the van (don't tell my wife) while we were driving to a show, he told me that their live shows will hit North American shores in January 2011. I am excited, as I have long wondered how these sounds would translate to the live setting - oscillating vocals accompany bizarre, tortured, and vaguely psychedelic cacophony...that's what OCCULT BLOOD create, and I want to have it blow my ears to shit in person. Until then, you (unless you live Down Under) will have to join me in pre-recorded and/or digital aural destruction. Two tracks, ten minutes.


STEPHEN HAWKING
Posted by the wizard at 6:02 AM