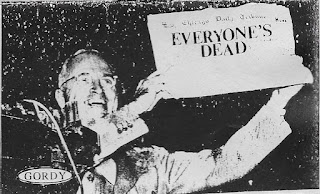 Another reminder that there were few (no) rules in the DIY 1990s - proficiency was optional and strict adherence to still developing subgenres was rare. While the more visible (audible) scenes in some of the trend setting regions (I'm talking NY and Oakland, really), those influences that would define a band's sound today, might just subtly steer a band's sound in one direction or another. The kids in GORDY likely shared a few East Bay punk tapes, but I'm guessing they were just as enamored with the DIY punk scene in Wisconsin, where they were from. Just some kids, taking a little of this and a little of that from whatever they could get their hands on, and banging out their own kind of punk...because they could. Is "Cute 'lil Fuckheads" a good song? Nah, it sucks. What about "Beautiful Conscience" or the instrumental ripper "3 Ninjas" or the other tracks where GORDY pulls it off? Yeah, those tracks rule. Imagine DAMITOL (Milwaukee) with a less technically proficient SCHLONG...if nothing else, GORDY feels familiar, like you already know them, even though you don't quite know what they're going to do.