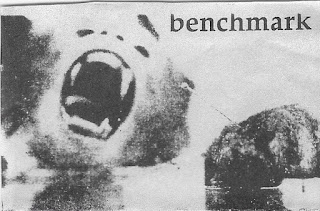 For the thousandth time: 1990s DIY hardcore rules. Bands took their influences and used them instead of aping them, and sounds spread as slowly as the letters mail so those influences had time to develop. And in places like Arkansas (or, in my case, Oklahoma), those influences were more spread out, more varied, and they were simply harder to come by...so bands had to make it happen. And often what the made was a whole far removed from any of its parts (or even from the people who made them). BENCHMARK were all of those things, and the result was fierce, emotional and personal hardcore - hoarse screaming about animal rights and sexual assault and they left everything in the room when they played. The chugs are formidable and the vocals are deadly (check "Tickle" in particular), and it all just feels fucking honest. For folks concerned about such things, three dudes in this band would later form BURNED UP BLED DRY, and one was in FROM ASHES RISE for the first two full lengths....yeah, the '90s weren't half bad.

i miss urgent hardcore like this.
i actually never heard this band before; the pedigree is nuts...
would love to hear more.
thanks as always!

The non-BUBD guy in the band went on to be in INK AND DAGGER from Philadelphia.
We had an idea to add some backing vocals on a song and the guy recording us just started the tape from the beginning and said “have at it” we all just sort of yelled randomly throughout the whole demo, which explains why there is an absolute shitload of unnecessary vocals on here haha.
Also, one of the two guys recording us was/is a bass player for BLACK OAK ARKANSAS so there’s that.