COMING BACK TO HAUNT YOU 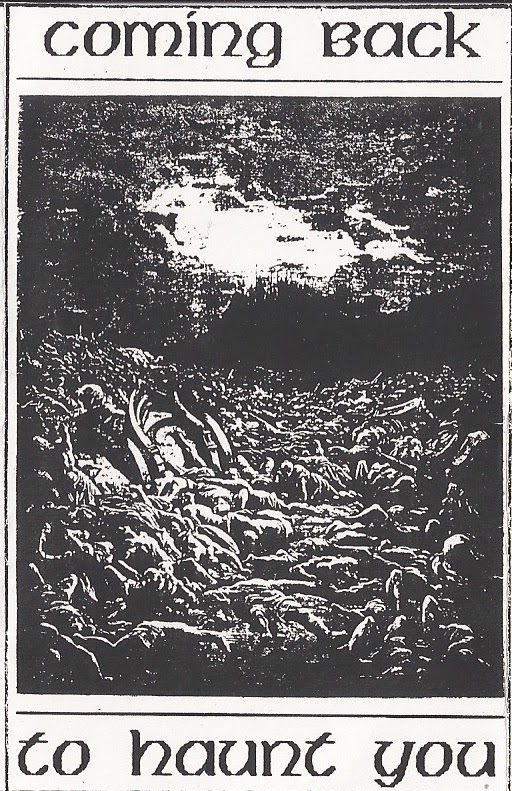 Early '90s European rough and tumble edge and 'core comp - from the hyper speed chugs from PROFAX that open the tape to the chaotic live X-LARGE track that wraps things up 90 minutes later, Coming Back To Haunt you is a killer glimpse into the less celebrated world of hardcore. THE CLOWN, LAST STRAW, X WOOLHEAD, HAMMERHEAD B.T., VITAKORN, ALL IN THE HEAD, and a slew of other bands you've never heard of....plus two rippers from MAN LIFTING BANNER. A heads up that a lot of the content here is live (or just generally raw), but personally I think that adds a little charm - the tape hiss just goes up with the volume. BETRAY (harmonics right out of the gate and straight into a whirlwind), ALL IN THE HEAD (pre-fastcore mania!) and POINT OF NO RETURN (best/worst bass tone ever) offer up my favorite tunes, in case anyone is keeping track.

COMING BACK TO HAUNT YOU
Posted by the wizard at 8:03 AM

I'm always a little baffled in these situations. Listen, I'm not bragging or trying to show off, here. I'm just being truthful. I drink and I do some drugs here and there. So, why is it that I'm always most attracted to the extremely abrasive and aggressive 'edge/core sounds? Is it like a dude that gets baked and then has urges to watch school safety videos? Is it like a sober-hippy that enjoys the DEAD? Is it something deeper? Anyways, I like the music raw. I like it fast. And I like it pissed. Those sober dudes seem to get it right sometimes... Good luck getting my liver in the organ-donor program, tho. Thanks for the post.