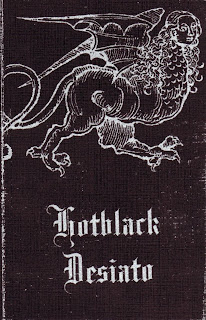 I'm not really drawn to stoner rock, it's just never tickled my fancy.  Every now and then I hear a band that makes my ears perk up, but for the most part I'll take my heavy music more in the form of the atmospheric, the noise, or the drone.  Don't get me wrong here, I love SABBATH as much as the next guy, and I'll even get into a Dio vs. Ozzy debate from time to time (for the record, I lean towards Dio simple because the entire body of his work with SABBATH is flawless, whereas the Ozzy era is tainted by the liberal smattering of clunkers on Technical Ecstasy and Never Say Die), but I simply prefer punk. Now I'm certainly not trying to suggest that HOTBLACK DESIATO achieve heights warranting BLACK SABBATH comparisons, but I do think that in a rock 'n roll world filled with third rate KYUSS emulators being passed off as the Next Wave Of Heavy Rock Greatness, songs like "Love Child Miscarriage" are well worth my attention. And the affected vocals at the start of the brilliantly titled "Rolling Joints Of Vengeance" might have me rubbed the wrong way at first, but I was more than completely sold before the second verse. This demo, recorded in 2004, features the drummer for Oakland's ACTS OF SEDITION, who was nice enough to drop off a few tapes a few tapes of projects past and present for The Escape (thanks Clint, and others please take note: Terminal Escape is an excellent home for your old and/or unwanted cassettes, just get in touch. I even pay postage...). The one live track shows the faster, more metal side of HOTBLACK DESIATO, and makes me wish there was more to this band than one four song tape...but that's how the great ones go, ain't it?

Unfortunately, you've opened a giant can of worms here, because this tape is actually NOT the only Hotblack Desiato recording. Furthermore, some of the other ones (and eventually ALL of them) are available for download HERE.

Any one who's interested should stop by and check out the shrine to our forgeotten old band. Have fun.