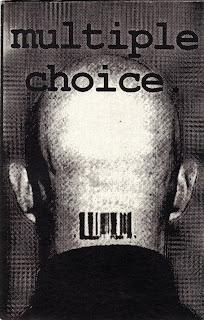 Matt, the guitar player for my first band, was the singer for MULTIPLE CHOICE... I heard the 4 track recordings that Matt and John (guitar) made with a drum machine and I was instantly jealous (they were far better than the band Matt and I were in), but sadly they had already recruited a bass player.  Patience has its plusses, and I joined the band in early 1993.  Our first show was opening for THE FLAMING LIPS and Matt spit beer on Wayne Coyne's mom, which I suppose made us punk? We recorded this tape in 1993 with Steve on drums, wrote the songs in Steve's dining room with cymbals hung from the ceiling by chains (seriously), and then sold them all for $1ppd in the pages of MRR. To date I have met exactly one person who ordered a copy, I hope everyone else liked it.  Three of us morphed into FUCKFACE a couple of years later and with a cadre of five drummers were on tour for a total of 44 weeks from 1994-97, playing nightly whether the "audience" wanted us to or not.  Matt's vocals are perhaps more manic and frustrated here than I've ever heard them in any of his bands since (that can probably be chalked up to living in Oklahoma); John's guitar shreds like it always has (though it took ten years to get him to play solos again after this first batch of MULTIPLE CHOICE songs); and I am hopelessly out of tune (no surprise there).  We didn't know what we were doing, and it was awesome. 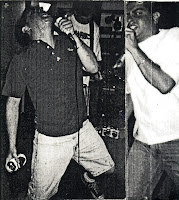 I love these Oklahoma demo posts! I remember Matt had a massive Venom record collection that i was quite jealous of.

This is waaay better than the punk band Marv and Dan I were in during 1994. We, equally, had no idea what we were doing and was hilarious. And fun. Thanks! This is PUNK!

Cymbals from the ceiling....is this the handywork of KING SESH?

KING SESH? aka STINKY? Steward of "The Trooper" and wearer of the finest mullet east of the Rockies? yeah, that's him.
Mike>>matt's venom collection was staggering!
Zack>>not knowing what you are doing usually does make it more fun. you can fuck up if you don't know what's wrong!