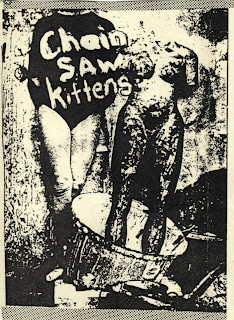 I've posted Oklahoma bands for the last few Sundays, and I'm keeping the run going today with the first two CHAINSAW KITTENS demos, released on one tape back in 1990. In the wake of grunge, there was a flurry of mostly fictional major label buzz infesting the music scenes of most college towns, and I was certainly not the only person in Norman who thought that CHAINSAW KITTENS might be "the one" that would break out.  They toured all the time, had a charismatic and flamboyant frontman (Tyson Meade, who previously fronted DEFENESTRATION), they wrote killer pop songs and they delivered them live with an energy that was equal parts NEW YORK DOLLS, MARC BOLAN and MC5 (or at least that's how it seemed to me at the time).  They signed to an indie label and released an album that I still pull out regularly, Violent Religion, and then it happened.  They got a new rhythm section, and then CHAINSAW KITTENS signed to fucking Atlantic...I knew they were gonna be huge.  Flipped Out In Singapore was heavier, perhaps the influence of a post NIRVANA Butch Vig at the control board had an impact on the band's saccharine sweet songs.  I watched the first video (for "Connie, I've Found The Door," a stellar pop song more than worthy of heavy rotation on "alternative" radio) on MTV and then, just like that...they flopped.  Maybe they got too normal and strayed away from their more glamorous roots, but I guess the recipe was just not quite right.  Don't bother downloading this if you're after raging hardcore (just scroll down for the Stockholm Hardcore tape), and come back tomorrow if you want anarchist minded glue sniffing UK rockers. But if you are a fan of well crafted power pop mixed with 70s glam, and don't mind the occasional love song thrown in the mix (seriously, "I'm Waiting" is one of the best punk love songs I've ever heard, and it made its way onto more than a few fruitless mix tapes created by yours truly during young adulthood), then click below, and then start scouring the dollar bins for copies of their first two records. And when you come across a vinyl copy of Flipped Out In Singapore, please drop me a line, I have wanted one for so long that I'm starting to think they only bothered making CD and cassette versions of the fucking thing.

The first four tracks are from the 1989 demo, including a way ill-advised, overproduced and too heavily stringed version of "She's Gone Mad" which appears on Violent Religion in much better form, and was given the treatment a few years back by THE FLAMING LIPS.  The 1990 tracks are rawer, and far slower than the versions that were on Violent Religion. There are a handful of live tracks as well, but they are just messier and perhaps drunker incarnations of the songs that are already on the two demos, so I exercised a little editorial control and left them on the cassette, where they belong.
Posted by the wizard at 12:52 AM

just re-zipped the MOB 47 post, and everything worked with no problems. please email me if there are still problems...

you dont like glam/power pop? why not give the CHAINSAW KITTENS a go?

Priceless/amazing. I'd be really interested to hear the live stuff, too.

This is one of my favorite bands. I've been listening to them since the early 90's. I'm originally from OK but didn't hear of them until I found a copy of "Pop Heiress" at a small disk shop in So Cal and immediately fell in love with "Soldier On My Shoulder". I'm glad they didn't get HUGE and burn out later on down the road to only do small dives trying to bring back the glory that once was like so many glam rock bands are doing these days with singers in their 50's still sporting girly hair and spandex which looks like like a freakish pedofile than anything else. If I could only have 5 albums to listen to for the rest of my life, Pop Heires would be one of those 5.

Thanks for putting this back up.