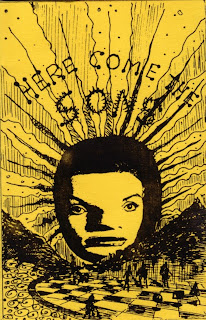 ILLEGITIMATE SONS OF JACKIE O were a fucking bulldozer of freaked out noise every time I saw them.  This demo is equal parts tortured hardcore and drug addled psychedelic fuzz, and it is still superb 19 years later.  The SONS were from Tulsa, and started clearing rooms in the mid/late 80s...it seemed that a town that was (at the time) best known for NOTA and the Confederate Hammer Skinheads didn't take too kindly to a 6'4" rail thin weirdo spazzing out and screaming the words to "Freaked Out Hippie Queer." The weirdo was Dan Riffe, and his guitar work was from another planet (as were his vocals); just wave after wave of distorted bliss, with wailing awkward leads that would hit you in the face like a spitwad that was equal parts JIMI HENDRIX and East Bay Ray.  Their live shows were the closest thing to Land Speed Record that I will ever see, just a total assault on every thing you though you knew about punk...after getting crushed by a dozen 90 second bursts of sweat and frustration, ILLEGITIMATE SONS might deliver "Danse O' The Sun Faerie," a six minute (or longer) three note psych jam that seemed to exist for Dan to channel demons and materialize them in the form of chorus pedals and feedback while Chris and John plodded and pounded away on a dirty groove that could continue indefinitely...and I never wanted it to end.  Dan moved to Norman in '92 or so, and joined my mediocre band after we booted our self righteous singer, but it turned out that he was every bit as bizarre as he appeared to be and the union (and the band) didn't last long. He also fronted THE BRUTAL GARDENERS (which I was in as well) and released a brilliant solo tape as  VAN GOGH'S EAR, all of which will make it onto Terminal Escape eventually. Through Dan, I discovered everything from WRETCHED and TERVEET KADET to NON...these are very important friends to have in Oklahoma, and I owe him a lot. ILLEGITIMATE SONS OF JACKIE O had a couple of vinyl releases as well, one on Dallas label Scratched Records and another one I've never been able to track down.  They look like shit, they are both amazing, but since you probably don't have them, I'll tide you over with this demo.

Fuckboyz played with these guys in Dallas in 1991 and almost released a record on Scratched. The guy that ran that label was weird.

I loved these guys,thanks for posting this tape since my copy is long lost.I remember playing a great house party with ISOJO in Norman.They were quite intense and underated.Mike

under rated, under loved, under appreciated. great fucking band.

I remember seeing them at least once in Dallas during the early 90s. I can't remember much but for some reason I always thought they had a funny name. Thanks! Oh, and a previous commentor is correct Gerard/Scratched Records was a UNIQUE

GERARD!! yes, that dude was a one of a kind for sure. I seem to remember he had a record store as well (was it called Slipped Disk?).
I'm glad I'm not the only one who remembers The Sons.

I don't think that Gerard owned a store. Kelly Keys owned Direct Hit, the store as well as the label. Gerard did spend a lot of time at Direct Hit Records as well as the main venue in town Slipped Disc. I haven't seen him in 15 or 16 years.

THATS RIGHT!! it totally was Direct Hit I was thinking of! I was confusing a label, a store, and a venue. Thanks.

all i have to say is fuck yeah

Trapped underfoot could be a long-lost hickey song

I was good friends with The Sons. Saw them play a hundred times. They even played a show in my living room once. What a killer, killer band. Dan has one of the most unique guitar styles ever and Chris is one of the finest, most interesting drummers I ever met. John is one of the coolest human beings ever and an avalanche on the bass. Pre-Illegitimate Sons, these three guys played for a while with a second guitarist named Val under the name Electric Buddha and those shows were also amazing. I tell you, dropping some A and taking in a Sons show was one hell of an experience. Dan is still making music and is back in Tulsa. I don't believe Chris and John are making music anymore (I could be wrong) and that's a shame. Magic days.