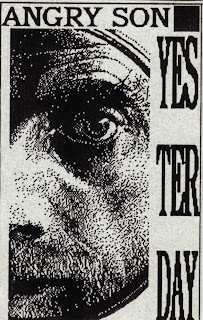 When I moved to Norman, Oklahoma in 1990, this band was the thing of fucking legends.  They had gone on tour, and they had played in California...and they had released a vinyl record (a split EP with San Francisco's FUEL, a record which I still enjoy).  All of these were goals that I only dreamed of achieving, but knew that I likely never would, so I lived vicariously through the stories of ANGRY SON going on tour, and of other Oklahoma bands meeting people we thought to be famous and seeing things we though to be exotic. It was at least something if you knew someone who knew people who had done something...that was better than nothing.  Listening back now, this ANGRY SON demo fits right in line with a lot of 90s DIY hardcore, I can imagine them playing Oklahoma with AVAIL on the Satiate tour, and it makes perfect sense (I don't know if they did, I'm just saying it seems like it would have been a good fit). We heard that when ANGRY SON toured to California, they got into a fight and broke up in San Francisco, and that the band left the singer there without so much as bus fare to get home...I have no idea if that story is true, but I certainly hope that it is.  Not out of any malice towards the singer, but simply because it's a good story, and good stories tend to get retold quite a lot, so they might as well be true, right? Members of ANGRY SON went on to join and form other Oklahoma bands like CLOVIS and SLUGFUZLE...and here is the ANGRY SON demo from 1991.

It's so cool how familiar this sound is from circa 1990. The vocal effects, drum mix, bass sound, etc all sound similar to Kenosha bands from the same period. Though I know this probably means a lot more to those from OK, this demo really brought memories back of old Kenosha area bands like Spot, US Distress, Skeleton Friend, and all sorts from that era. Awesome stuff!

Thanks again for more demos. I cannot remember if I ever saw them but if they played Dallas during the early 90s I am sure I did. I liked the split with Fuel(gazi) so I am looking forward to hearing the demo.

Links to some more tunes on last.fm.

If you're interested in original Angry Son mp3s I got em all including some live.