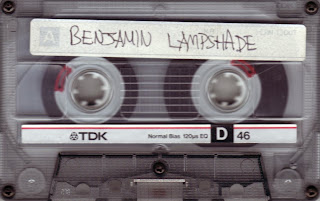 I beg of you, don't be turned off by the ridiculous title of this post, because this 1988 demo from BENJAMIN LAMPSHADE  is a gloriously noisy dirge of dark UK punk.  Equal parts KILLING JOKE, UK DECAY and BAUHAUS, with guitar leads that would sound just as at home on a ZOUNDS record as it would a SCRATCH ACID release, and a hollow affected guitar tone that won me over 20 seconds into "The Madman's Waltz." These tracks were recorded at Soundstar in London in 1988, and the band's contact was Phil, on Palmerston Road...so Phil, drop me a line will you?  I need more of this BENJAMIN LAMPSHADE shits!!  Brilliant.

i've been listening to this tape a lot the past few days...i think i like it better every time.

looks like i forgot to thank you for this one, so here it is:

A Taste of Hysteria said...

this is awesome! thanks as well!

Hi. i was the gutarist for Benjamin Lampshade, if anyone would like any info then please contact me at jeffeferon@yahoo.co.uk

Hey sorry to dig into a nine year old post but I would LOVE to hear this, would you so kindly be able to reupload this please please please? i can't put my finger on it but this band name rings a bell for some reason, and reading such great reviews has me stammering like a child missing his toy. Please and thank you! Fukkin luv da blog old boy!