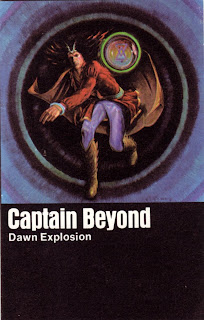 CAPTAIN BEYOND fly just under the radar of most casual prog/psych fans, though even a cursory listen to their first two albums, 1972's self titled Captain Beyond and Sufficiently Breathless, released the following year, leaves me baffled as to why they aren't considered the cream of the crop.  Formed by the IRON BUTTERFLY rhythm section (that's the "In-A-Gadda-Da-Vida" IRON BUTTERFLY, in case you were wondering) and former DEEP PURPLE frontman Rod Evans (who thankfully left DEEP PURPLE after "Hush" and before In Rock, clearing the way for Ian Gillan to lay down vocal licks on what might be my favorite heavy rock album of all time) in 1972 but quickly parted ways the following year after delivering two masterpieces.  But two records just weren't enough, and in 1977 CAPTAIN BEYOND reformed with Will Daffern taking over vocal duties (yeah dude, your guess is as good as mine) and brought us Dawn Explosion before breaking up yet again. Dawn Explosion is completely overlooked, even by fans of the first two records, perhaps because Daffern's vocals don't really hold a candle to Evans', but even though "Sweet Dreams" sounds like a million other coke addled 70s schlock ballads, if you can make your way through its 5 1/2 minutes, then you are rewarded with 6 minutes of "Fantasy," a killer driving boogie rock number that wraps up the first side.  Likewise, side two is all about the last track; after two pretty good 70s rock jams and one total stinker, "Space Interlude" gives way into "Oblivion," which is a prog nerd's dream track and just simply jams so much that it makes it hard for me to make my breakfast (which is probably why prog nerds mostly listen to KING CRIMSON at night after doing a little mary jane, I'm guessing) and then fades right back into "Space Reprise" to close out the tape.

Oh yeah, this is ripped off of cassette, just to maintain what pathetic integrity a tape-only blog might be able to claim.
- December 08, 2009

Email ThisBlogThis!Share to TwitterShare to FacebookShare to Pinterest
Labels: psychedelic

hi, do you have any demo of abnormal (wales) or 7th plague (bullshit detector band)?

i hope you still remember to post something of 4 minute warning :)

Wow, I've never even heard of this Captain Beyond record and I really like the first two... thanks for posting it!

this one was a surprise to me when i picked it up as well...but save the two clunkers (were there really that many 70s rock records that DIDN'T have the odd turd hidden between the diamonds?), i think this thing totally jams.