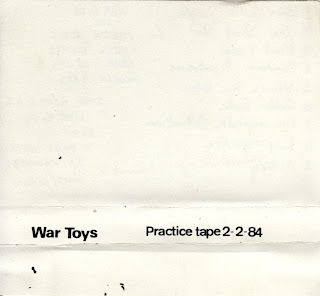 Their April 1984 demo was one of the first post on Terminal Escape, and though that tape is higher quality than this rehearsal recording from two months prior, I keep coming back to these tracks instead of the 'proper' demo. The guitars are ethereal and seem to float above the songs, and the vocalist is always about one off key wail away from being really fukkn irritating, but he manages to hold down the fort (or the mic stand) and deliver a brilliant and swaying goth punk performance. The bass and drums create a foundation steeped in moody punk a la early JOY DIVISION and then the guitar and vox take WAR TOYS somewhere else entirely. "Great Escape" is the standout track...the guitars conjure aural images of DEATH CULT, while "Unexcusable (sic) Situation" is perfectly executed goth punk with the emphasis on the punk. I wish that these performances had been given the recording treatment that their demo did, but I'm not here to complain.
PRACTICE TAPE 02-02-84 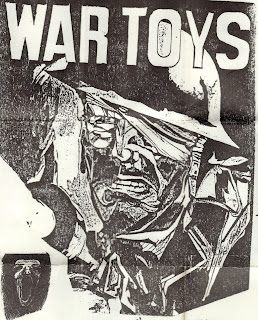 I was always confused as there was a war toys from wigan(some were ex system) an wartoys from nr.devon more confusingly I got a tape with both..so maybe they moved around