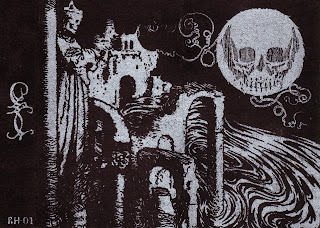 RHINOCERVS is a relatively new metal collective in Southern California. Loosely associated with the Crepusculo Negro and Black Twilight folks, their objective appears to be creating dark and oppressive atmospheric black metal instead of showering themselves with adoration from fans. So focused are they on the music, rather than the mania, that the first two RHINOCERVS releases are without band names, without release names, without song titles - just two cassettes, each bearing a catalog number and four movements. Howling, primitive, soaring....raw and gorgeous. This is the first release, the second will surely appear here eventually.

Man - this is so fucking good. I've been blasting it over and over. Can't wait to here the second one!

This rip sounds better than the other one floating around. I ordered # 2 from the label cos people said it was the better one, but this shit is great too... kinda creeps up on you how cool the riffs are but also the "singing" parts.