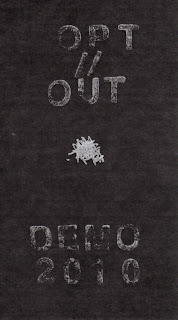 This was recorded back in January, just before OPT OUT and NO STATIK made a quick jaunt down to LA to introduce ourselves to our southern neighbors. 8 songs, everything first take, we went from van fully loaded to recording started to recording finished to van re-loaded in just over 5 hours, which I think is pretty damn quick. I call this "frustrated hardcore" when people ask, but it's kinda hard to come up with descriptors for your own bands, so you can call it whatever you like. I am lucky enough to be playing with kids from DECONDITIONED, CARNAL KNOWLEDGE, and CONDENADA in this band, and we are playing tonight in Potrero Hill if I get out of work in time. It is a glaring and terrifying indicator of looming adulthood when you have to put playing a show in the "maybe" column contingent on a job - but such is life.

I made these other covers in a few minutes before we left for those LA shows (first edition!), but Dan wanted new ones. I suppose if my mug was emblazoned across the cover then I might want an alternate version as well. But since the original cover looks so fukkn rad, I feel the need to share it here: 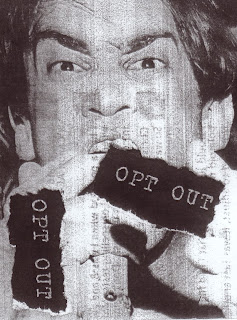 More Shameless Promotion: I've got pro-dubbed and printed copies of this demo (and NO STATIK and VACCUUM) for $4ppd, hit me up if interested.

I will send you money for those so I have physical copies. Put one aside for me? Also, did you get the last Party By The Slice tape (with the Exploited cover)?

IN AGONY YOU SCREAM said...

rad shit digging it for sure!

you got any opt out material left i can buy off you??

Anyone who is interested: I have copies of this demo for $4ppd (US/Canada/Mexico), $6ppd (everywhere else). Drop me a line.

Can be reached through this blog, or via the seldom updated optthefuckout.blogspot.com