I first heard SLEEPING BODY from Karoline, and I was thoroughly unimpressed. Maybe it was a live thing, I thought, but that EP just sounded boring and atonal to me...fast forward 15 years and I devour every song on that single. Not sure whether my horizons expanded or my mind opened, but now this Ft. Worth, Texas band seems so bare and exposed, that I find it impossible to not be drawn in. SLEEPING BODY were a part of the chaotic early '90s community vaguely associated with (by sound, if not by necessarily by community) BORN AGAINST, MOSS ICON and early Gravity Records output, and with the exception of BORN AGAINST, most of that world skipped me completely. Jerky rhythms and excessively harsh vocals typify SLEEPING BODY, and this WFMU recording leads me to believe that their live shows were even more abrasive than the record. 36 minutes on the radio in 1992 that will not appeal to fans of straightforward punk/hardcore, but rather exemplify a new direction that was taken by bands struggling to break free from the confines (both musically and ideologically) and constraints placed on them by their adopted community. DIY, raw as hell, bare and exposed. 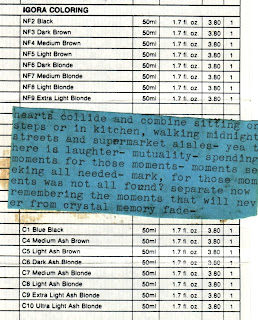 i have been listing to a few newer bands like Excuses from ireland http://www.mediafire.com/?nr0gznjgtzt
it's good shit.

fancy having a listen to my band? my blog agzdaredz.blogspot.com my band Dr AIDS - NECROQUEGCUNTCORE demo let us know my email on my blog somewhere would love to here from ya

Now this post hits real close to home. I knew some of the guys in the band and saw them as many times as I could. I think you were correct that on vinyl they failed to really convey their emotion and power. Live it was so evident and visceral that sometimes it remained barely believable. While the members of the band have since gone their separate ways one member is no longer living. Chad P. the singer died a few years ago after a crash on his scooter. He was a gentle and kind soul over-flowing with creativity and all those who knew him suffer by his loss. Thanks, for remembering them.

This is fucking outstanding. The WFMU set has been circulating on the internet for years but yours is a significantly better rip and that rules so hard. I think the spirit of experimentation and growth that existed within hardcore at the time is exemplified by this set, the way they were so fearlessly willing to try new things and push the boundaries of what even constituted hardcore as a genre. Thanks so much for posting this. I've linked your post on my tumblr (http://andrewtsks.tumblr.com/post/869337576/sleeping-body-live-on-wfmu) and said a bunch of really hyperbolic shit on there about how great this tape is, so hopefully people will be coming here to download it.

thanks for the words and additional background on SLEEPING BODY. I know they hit a lot of people really hard while they were around, and I'm happy to share the tape with those who weren't.

You should put together a discography. If you can find the 3-song demo cassette, the song "Bleeding Heart Shit" on a compilation 7" flexi entitled "4 Bands I Like" (which I have if resources need to be pulled). There are also two unreleased songs from the "Awaken" sessions and the "Awaken" 7" (which is readily available online). Good luck. Great rip.

awesome! thanks for posting!

I saw SLEEPING BODY and they were honestly the most intense band live I have ever seen. They even had UOA by a hair. They also sold $1 T-SHIRTS. What's weirder is they broke up but took up residence at TONIE JOY's 169 Bone Closet for a while and sat around and did naked devil worshipping. No shit.

This was a favorite band of mine from that time, I too remember that spell they spent at 169. I also remember another TX band from that era, I think they were called Voice of Reason - i set up a show in Bmore with them around that same time. Wonder whatever happened to those guys. I gotta break out those 7"s...