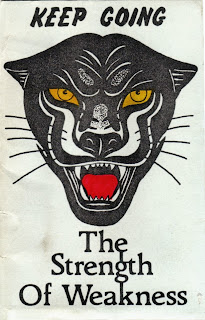 More stuff here from Wales. Its seems that STRENGTH OF WEAKNESS only gave us this one demo, though from the sound of it I wouldn't be at all surprised if they had changed their name and tries to go a touch more commercial. The title track of the demo has guitar hooks worthy of the classic early CULT (or DEATH CULT) stuff, and though "Borstal Boy" isn't quite as brilliant as SHAM 69's "Borstal Breakout," it's certainly in the same league. The opener, "Question Song," is the sort of slow reggae infused UK punk that I hated for years, and now have grown to really really enjoy (much to my own dismay), and Keep Going closes with the rather plodding "Time Runnin' Out" which I admit ends things with a bit of a whimper, but the other three tracks more than make up for whatever you might find lacking. As is typical, I know little about these cats...they came from Bridgend and this was recorded in Cardiff in 1984.

Contact Bluurg directly, in my experience they have always been more than willing to take requests, even when the releases are no long "officially" available on the website. I'm sure that the originals are still lying around (or boxed up), and getting a copy shouldn't be too hard.
http://www.subhumans.co.uk/

That sound true. I spoke to Dick (twice) in Glasgow in May, and he said he did not remember what he had as cassettes no more cause it was so many.


I haven't tried out myself yet though, but...

i think with most of the Bluurg tape/CDr releases, for the last several years he has just dubbed them "to order." I wish I had that A HEADS stuff myself...