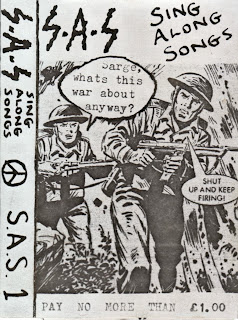 I am well aware that the "modern" tapes I post are not met with very much (if any) excitement. Except from me, which is why I continue to post them. I also realize that the last 80s upload I gave you was BAD BEACH, which is certainly worth a few listens, if only because it might take a little while to determine that it is actually not really all that impressive. So today, you get a treat. Pushead gave this demo a good review back in 1984, and one listen will leave no question as to why. Instead of just managing to "stand up" to the test of time, I think these S.A.S. tracks are even more impressive 26 years later! This rapid fire UK punk recorded in '83 owes as much to early US hardcore as it does to the punks from their homeland. Fiercely political, high charged and punk as shit, it's like COURT MARTIAL doing FUs covers...and it's not difficult at all to imagine early UK thrash/hardcore like RIPCORD or GENERIC taking liberal cues from S.A.S., especially "Day Of Oblivion," the second track, which sounds like a slightly slowed down RIPCORD tune with my early morning "haven't had any caffeine" ears. "The Heroes Are All Dead" is a pure UK riot punk ripper, and "Slaughter Of The Innocent" is pure glorious DISORDER madness. "We Don't Need It" could be a lost early Dischord track; GOVERNMENT ISSUE, TEEN IDLES, S.O.A., I am sure these records did not go unnoticed by S.A.S.

You can (hopefully) get their lone EP at 7inchpunk (am I not the only one who is bummed that this site has fallen by the wayside? and what happened to punktapes.com? such promise...), but not until after you check out the demo, rawer and punker, as demos typically are. Enjoy your day.

Thank you very much!! Another one of my top wants!!

I yeah forgot to remind you they were also included on the V/A LP "Compulsary Overtime". Those tracks were 'Accident' and 'Scapegoats'

that's ridiculous. not remotely surprising, but ridiculous nonetheless. I would love to track down the EP, but I doubt I would be willing to pay for it.

it occurs to me that often technology (or at least those who created it) is smarter that I am, and therefore sometimes you folks get the tracks in ALPHABETICAL order, not the order on the tapes. when I get more smrt, this problem will stop being a problem.
here is the track listing for the S.A.S. demo:
SIDE A
1. Is Mankind Gonna Abolish War?
2. Empire Of Destruction
3. Ireland
4. Meaningless Name
5. Scapegoats
6. Damnation
7. Purgatory
SIDE B
1. DAY OF OBLIVION
2. WE DON'T NEED IT
3. RIOT IN THE CITY
4. SLAUGHTER OF THE INNOCENT
5. EVO-STIK
6. THE HEROES ARE ALL DEAD

and $30 for the EP is pretty reasonable, considering what it's gone for in the past. hmmm, I might treat myself!

Great blog and a great tape. Thank you so much for your time and energy on this one.