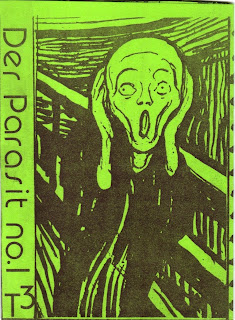 As I mentioned with the State Of Confusion comp a few weeks ago, the ease with which a punk (or even better, a "tape label") could put together a cassette release in the 80s is astounding. Most of these official releases were dubbed one by one, the covers photocopied to order so that they never had to be made until it was sure they were to be sold. No risk, no worry! Starting today, I'm going to post a compilation tape (or mix tape) every friday, and I figure I better start with a ripper, right? Here you go:

This Maxell UL60 is chock full of brilliant 80s DeutschPunk from a few bands I was familiar with, but Der Parasit no. 1 has heaps of bands that I had never heard at all. CERESIT is probably the best known band on the tape, and one of their tracks, "Snuff Squad" appears later on their classic Three Gallows LP. LIEBIS deliver 80s German punk in it's finest and most simplistic form, the riffs are melodic and bouncy but the attack is still pissed. R.A.F.G.I.E.R. were unknown to me before this, but these songs are stellar, I only wish that they were both studio tracks. The REST OF THE BOYS tracks are a little disappointing...not bad, but they fall a little flat for me. But S.O.S. is worth the whole comp for me...scorching furious German HC at it's finest, and they wrap the tape up with "Neonazischweinne," which is probably my favorite track in the whole hour. In all there are 26 songs by 11 German bands, a pretty sweet way to spend an hour, I'd say.

in case the tracks appear alphabetically, I've included the side and track order at the start of the title of each song (A1, A2, A3, etc), so you can reorganize them if you choose.
i'm still open to advise on how to get itunes to stop automatically putting an album's songs in alphabetical order?

Cheers Robert!!!You should post the A.C.P. tape or the Buttmen if you have 'em,just played a killer house show in Norman it reminded me of the early 90's parties in that area.....Mike

man, I wish I had Buttmen tapes, you should post 'em if you have any. as for ACP...no one wants to hear that!!
glad you are well...

i was wondering if you had any german punk

do have the uproght citizens demo been wanting to find that for years.

i dont have upright citizens, in fact most of the German stuff i have is comps. you've looked at tapeattack? damn man, that stuff blows me away, all of it totally new to me!

Wow, the first Tod & Teufel Tape to appear on an international blog - how cool is that? Love that one - thanks a lot..!