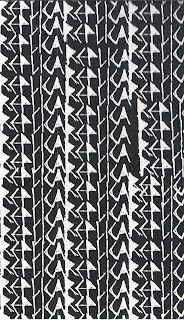 REPLICA are the best. This doesn't mean that your favorite band is somehow bad, it just means that any time I see REPLICA live or listen to this demo, they are the only thing in the world. I never want anything more than what they are giving, and there is nothing missing...they are the best. The band kinda came out of nowhere, B from NO STATIK making some noise with a lady from Philadelphia and then before I knew it they were a fukkn machine. The first show at Thrillhouse was only five songs, shorter than this demo cassette, and the room was absolutely leveled...B and Alicia were joined by Dharma from DUCK & COVER and Juliana from Brasilian '00s thrashers INFECT, whose work I have been a fan of for a solid decade. So that REPLICA was good - really good - came as no surprise, but I don't think anyone was prepared for them to be this good. This is hardcore with teeth, and with more originality on this five song banger than most bands manage to eek out of their entire futile careers. Dharma is an absolute animal, and her live rage somehow manages to transfer to cassette without losing a shred of intensity. The riffs just kill, going from bursts ripped from the hearts of DBeat maniacs to the chaotic urgency typically found in the mid '90s, all propelled forward by B hitting the drums with a determination that just screams for you to get out of their way (makes me realize how lucky I am to do time with him in NO STATIK). "Last Judgement" touches on a catchy hook (it's mostly the bass), and when they play this jam live the joint erupts in gloriously uncontrolled spastic elation, and then they close the demo by pounding "Sandy Bottoms" into the ground. The most straight forward song on the demo, Dharma uses that last 0:59 to make sure that you have been paying attention, she takes a basic track and makes it exceptional with a snarl that will give you chills. Press play, and you won't need anything else until it's over. Because REPLICA are the best. 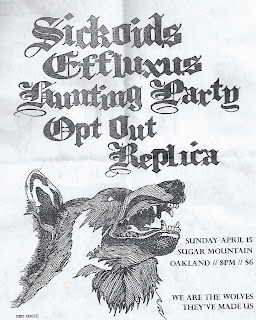 A show filled with the best bands tonight in Oakland. Terminal Escape veterans SICKOIDS from Philadelphia might be the sickest hardcore juggernaut in North America right now, and locals EFFLUXUS and HUNTING PARTY typically have the same effect as REPLICA - once the set starts, everything else stops and nothing else matters. That's what the best bands can do.

Thanks loads for this!

Would you mind re-upping this? The dowload expired and I love to hear it! Thanks!