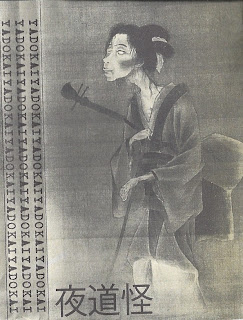 Between a guitarist relocated to Southern California and other projects (HUNTING PARTY, EFFLUXUS, FACE THE RAIL, SYNTHETIC ID and more, strangely all of them are bad ass), I think YADOKAI are on their way out. It's too bad, because their version of lightning speed Japanese influenced hardcore punk is unparalleled, especially around these parts. The first demo is great, the first EP is a chaotic treat, but the second drummer suits their style perfectly and the result is a little more cohesive, which allows them to ramp up the energy and the pace. A second EP can (maybe?) be had through these punx, but this tape (released in a pathetically limited run for their summer '11 trip to LA) is long gone. Crucial. 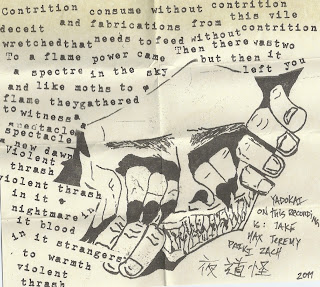 That the San Francisco Bay Area produces an disproportionately high number of quality punk and hardcore bands is not a secret, but lately I've felt especially fortunate to live here and see so many excellent shows. I missed out on a couple last week due to adulthood, but instead of getting all bummed out I hauled my ass to Oakland to get drilled in the face by PERMANENT RUIN and LA's BLOODY PHOENIX - worth it. So I'm going to spend the next week celebrating this wealthy ass metropolis filled with miscreants, weirdos, yuppies, tech millionaires and addicts.

This tape was actually made for our September trip up north to play Distort Vancouver vol.7. We played 5 shows in total on that trip and that was the only time you could get this tape. The tape consists of 3 songs. 2 of which are from the 2nd ep that you can get from:http://videodiseaserecords.com/

The other song is being used for the 3rd 7". We re-recorded it along with two others. It will be released some day on Lengua Armada.

Im hoping we will play a few more shows. Daiki moving to SD has slowed us down to a screeching halt.. but, this is not the end.