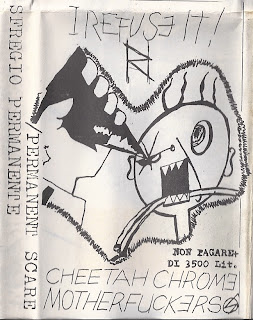 Mandatory '80s Italian hardcore, this is tape version of the split LP from I REFUSE IT! and CHEETAH CHROME MOTHERFUCKERS. CCM crank out 20 tracks in well under half an hour - searing guitars and gravelly vocals snarling their way through an attack that is equal parts GERMS, primitive FLAG and murky European squats. I REFUSE IT! have always (perhaps inexplicably) reminded me of BIG BOYS, but incarnated as relentless thrashers. The irreverence is there and is arguably their principal appeal, but tracks like "Fall Down" and "Contagio" just fukkn swing, and make awkward physical motions often referred to as "dancing" nearly unavoidable. This release and these bands have been well documented, and most internet trollers have probably had these files lurking around their external hard drives nicked off youtube in some fourth generation manifestation two months after they first heard Operation Ivy. But punk evolution (and the evolution of punks) used to be different, and even though I knew about Sfregio Permanente, it was years before I ever heard these sounds. No matter, because "Questo e I'inferno" and "Secret Hate" will blow your mind, regardless of the stage of your punk development. 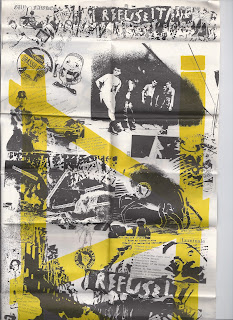 "even though I knew about Sfregio Permanente, it was years before I ever heard these sounds."

I feel like this about a lot of things. Thanks for posting. This is making my day! Though CCM always makes my day (as does I Refuse It).

I love how often you update your blog. Gives me something to look forward to everyday. Thank you!

fucking "barbed wire world" is one of the most raging hardcore songs ever recorded - better than any black flag, discharge, or gism song! i said it!

i refuse it! = unique and aggressive hardcore. A favorite download/find band for me that's been a favorite in recent years.