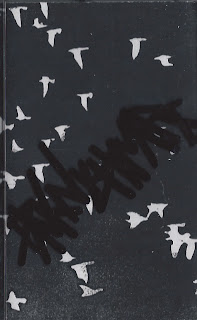 I confess that I snoozed on this one after I picked it up at their SF show last year. Maybe it was an off night, maybe I was still reveling in the glow of the FOREIGN OBJECTS show that had just happened across town, or maybe I just wasn't in the mood for PINK NIGHTMARE...but when everyone told me how killer the show was the following night in Oakland, I just didn't quite get it. Giving this tape a listen now (over a year later) trying to purge a few (hundred) unwanted cassettes, I'm fukkn beating myself up for not crossing the bridge to see them in Oakland, and I'm laughing at myself for letting this gem languish on a shelf for all those months. Foolish decisions, but at least I can make up for lost time on the second one - as for seeing them live....I'll just have to hope they hit the west coast again so I can feel redeemed. PINK NIGHTMARE put the punk into UK influenced jams, but these women are rooted in US punk and hardcore, and they can't quite seem to break from history. Members of FOREIGN OBJECTS, RED THREAD, CONVERSIONS, POSITIVE REINFORCEMENT and many others...don't make the same mistake I did.
PINK NIGHTMARE
Posted by the wizard at 5:00 AM

You convinced me with that writing .
I downloaded it . great stuff indeed ;

is there any way you could re-up this?