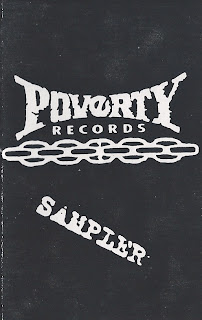 It was the 1990s, and the idea of starting a label with two bands a roster made up of drug addled savants from the neighborhood, your aspiring rapper co-worker and your long defunct metal band seemed like a great idea. So Chewy did exactly that, and I can only imagine how much money he lost in the process. At the beginning of the ordeal, he dropped this cassette featuring two tracks from HICKEY (well documented, but find more here if you are uninitiated), BIG MEAT COMBO (the Mission's finest raunchy bluegrass band, long before retro country was en vogue), OSGOOD SLAUGHTER (pre-UNHOLY CADAVER, who were in turn pre-HAMMERS OF MISFORTUNE, and likely the only American metal band to ever tour Guam), THUNDERCHIMP (the space metal band that came in between OSGOOD and UNHOLY CADAVER), P.H.L.O.N. ("It's Not About A Salary" could have been the theme song for the label) and FUCKFACE. Poverty released a few EPs, HICKEY's ill fated discography (recently given the total treatment by 1-2-3-4 Go!) and a brilliant box set of singles that perfectly captured our little neighborhood circa 199whatever. I don't see Chewy as often as I would like, but the new HAMMERS record is fukkn great, and I think I want KING CITY to play our twentieth wedding anniversary just like they did our tenth. Even if it's just in our kitchen.

POVERTY RECORDS SAMPLER
Posted by the wizard at 5:00 AM

90s Mission district comp, nice! Do you have the Dill Records "Mission Accomplished" comp? I've been wanting to hear that forever.

Of course I do.....one of the weirdest and best 2xCD releases ever....