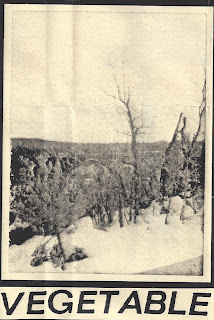 I was hooked immediately by the disjointed and minimal sound of VEGETABLE's EP a few months back - the off kilter "Castration Frustration" anchored that single with a perfect marriage of UK post punk weirdness and early DEVO awkwardness. I was out of town when they came through on tour, but after hearing this ten song tape I really hope that they will hit the road again soon, as the EP only hinted at what VEGETABLE were capable of. Songs like "Anatomical" could have easily found a home in the artiest corners of the early SF punk scene, when there were no rules. Guitar leads the band, often taking the single note melody to the forefront while the vocals lay back with an overtly urgent intensity that is enhanced by cracks brought on by an ultra lo-fi reproduction that does as much battle with tape hiss as with musical convention. Words like "quirky" and "challenging" could be used to describe VEGETABLE, their approach is anything but traditional, but these short bursts of oddity are simple and catchy, like pretentious dance punk stripped down to its barest frame and presented in its purest form. Plodding and deliberate, bringing to minds as varied as THE GOVERNMENT (Toronto), THE GIRLS (Boston) and THE FALL. More addictive with every listen, don't say I didn't warn you...and I think this might be a teaser for a full length in the near future. Let's hope so. 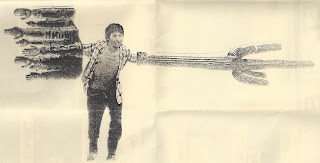 Hey man, peace from NB Canada and thanks for doing such an awesome job on your blog. My buddys are in a band called Contagium, based outta Halifax. Have you heard em?

i have to say this was ABSOLUTELY worth the wait! its great! thanks WIZARD pal.

I know Contagium, I believe they played here and I missed them though...I'm sure I had an excellent excuse. Halifax seems like it's jumping with good bands these days - keep 'em coming!

cdb - glad you enjoyed, now let's gets our hands on the LP.