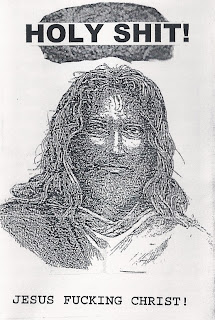 Hard to believe that this nonsense is a decade old, and that I first saw this band nine years ago. But time waits for no one, and those fukkd up Adderall junkies that delivered the most irreverent thrashing noisy hardcore that Beer City could handle are now wizened old men who have hung up their raging shoes in favor of day jobs and family life. Long gone are the days filled with beer from the discontinued and expired liquor store in the suburbs and the house shows and the arguments about who is sober enough to walk a wagon to the beer store on the East Side to buy the 48 pack that comes in an octagon and only costs $13. The nights of pharmaceutical speed and shotgunning cans of whatever is cheapest are in the past, right alongside memories of watching HOLY SHIT! blast through 20 a song set, then emerge from the basement ten minutes after they started and watching the steam rise from their shirtless bodies into the Wisconsin winter air. Now they are watching football with their families on the weekend, hosting potluck dinners and sharing potato salad, talking about their jobs. Tabman doesn't writhe on the floor anymore, and Andy has traded these 45 second blasts of Midwestern hardcore damage for the 9 to 5...it's hard to blame them, this rock and roll stuff is hard. It's cool though, they've left us with good jams, good shows, great memories, and a ballsy DIE KREUZEN cover. This is as raw as punk gets, and the longest of these fifteen tracks is a hair over a minute. 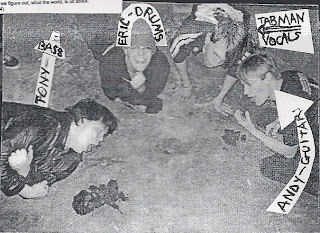 (HOLY SHIT! play tonight in Oakland at Sugar Mountain with YOUR PEST BAND from Japan, and tomorrow at Thrillhouse in SF with my buddies in COPS! ... Residents of the Bay Area will do themselves a favor by attending)

Holy Shit!, I've been wanting to see Your Pest Band play for some time now. Man, I wish I could be there tonight. I'll just have to wait until they hit my neck of the woods. Killer post.

Here are some dates for the Holy Shit! Your Pest Band tour that I found:

When i saw holy shit in allentown, pa 4 years ago they were downing vodka out of sippy cups and just yelling 'SIPPY CUP' between songs.
why couldn't they have said it in this vidoe!?
http://www.youtube.com/watch?v=jCWMOosdtXo&feature=player_profilepage

Thats awesome Robert that you would mention the fucking 48 pack in an octagon case. All My Circuits would buy one before our show and hand them out as we played.

Hey , 60th and Silver Spring is HARDLY the suburbs!