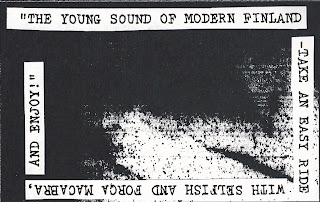 Not much should need to be said here, two of Finland's most notorious exports on one split live cassette. Both bands shamelessly and brilliantly ape styles made famous by scenes in countries far from Scandinavia: SELFISH dish out a masterful version of late '80s/early '90s Japanese hardcore made famous by bands often tagged with the "Burning Spirits" descriptor, while FORCA MACABRA perfectly imitate '80s Brasilian thrash metal (so perfectly that their live set descends into drunken guitar wankery about 2/3 of the way through the set, listen to "Cavaleiro Negro" for proof). SELFISH tracks were recorded in Philadelphia in 2002, while FORCA MACABRA's side comes from a performance the following year in Tornio. Both singers are superb (think Ishiya/DEATH SIDE for the Japanese model, and LOBOTOMIA for the South American version - if you're planning to copy a style, then at least shoot for the top, right?), and both bands rip, but you should have already known that.

This split is on its second run, you can get your own copy from: chaosnonmusica(at)gmail(dot)com

I saw Selfish somewhere around '02, they were WILD. Thanks for this.

Thanks for posting this tape! I was very happy to have released it. I'm actually all sold out of it now (some distros might still have some), but at least people can get it here.