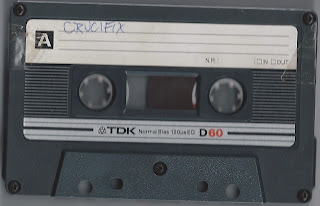 Two interviews. One with CRUCIFIX, the legendary Bay Area band. One with CCM, the legendary Italian band. Both of these interviews are conducted by the same person in 198something. I like that CRUCIFIX says they understand why people compare them to DISCHARGE because "they play fast heavy metal like we do." And I like CCM telling the interviewer that their name had nothing to do with the guitarist for the DEAD BOYS (the moniker came from a comic strip, and they added the "Motherfuckers" to shock people). Start steeping your tea, and sit back and listen.

"We just care about fucking hardcore. New wave sucks, that's been proved, it's just used for dancing - that's all, it's just a matter of fashion. Hardcore is the only way."
- Cheetah Chrome Motherfuckers, 198?

whoa! i luv me some back-handed appreciation!

I believe that TG is from Australia, and his use of the word was meant in a friendly and jovial manner, as is not unusual in many commonwealth countries.

Any chance for a re-up? Would love to hear both of these (especially the CCM interview!)