BITE ITSELF // SELF COM 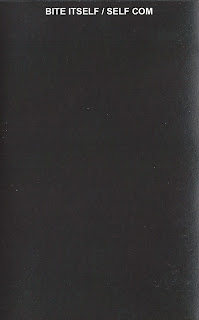 It's been nearly a year since I first heard SELF COM, but I devour everything I can get my hands (and ears on). His sounds are mesmerizing, simple, and utterly brilliant. This time around I had to endure one 9 minute track from BITE ITSELF before I could hear the new songs, but it was torture of the most glorious sort. "Hotel Abyss" could exist as the soundtrack for a short horror film, or as a singular piece of minimal brilliance...these are all sounds that I have heard before, but never in this context and never sounding this harsh or intimidating. SELF COM do not disappoint - dark droning synth with politely tortured vocals. "Dead Space" is as simple four notes on repeat, yet somehow it envelops you, while "I'm A Man" realizes a dark vibe that Vega and Rev could only have dreamed of when composing  pretentious synth driven no wave sounds 30 years ago. I like those pretentious synth driven sounds, but this tape achieves something other worldly. This comes from Casual Men.

BITE ITSELF // SELF COM

thanks for the kind words. this bite itself stuff is the most sort of soundtrack style that i have done, and the farthest cry from unpersons yet, probably. remind me and i'll get you a copy of the book-on-tape that i did a few years ago, which has songs, in a way.