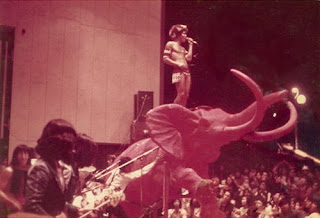 Akira "Joe" Yamanaka was the vocalist for the insanely influential Japanese psych outfit FLOWER TRAVELLIN' BAND, and 1971's Satori is without a doubt one of the most groundbreaking and unique records that can possibly be lumped into that genre. His vocals are unparalleled, and held up perfectly when I was lucky enough to see them in 2009...when they played the songs from that record in their entirety. This footage is amazing, even if only set to the studio recording - an incredible voice. His lung cancer was made public last year, and his death was announced today.
Posted by the wizard at 10:04 AM

SAD TO HEAR- WHEN THEY WERE TO PLAY NYC SEVERAL YEARS AGO & I WAS ABLE TO GO THEY WERE UNABLE TO MAKE IT TO THE STATES & IT WAS RESCHEDULED IN MY DISFAVOR- SUCH IS LIFE.

I was just listening to Satori last night thinking about how much I love that album.