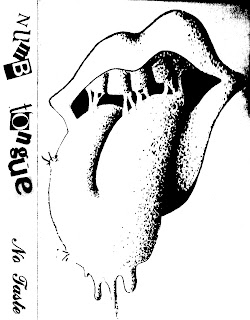 This 1984 comp started the label that would eventually become Empty Records in Germany who, under their moniker Masking Tapes, were also responsible for the Godfodder cassette that appeared on Terminal Escape last year.  Without the booklet, I have little information about most of these bands, but I know that the tape is stuffed with quality weirdo punk from all over the world. I can only assume that ARCHIVSKA ZABAVA are from Eastern Europe, and their plodding guitar noise laden tracks lend credence to my assumption. BORN WITHOUT A FACE are noisy and fukkd sounding Midwest punk from Michigan. GLORIOUS DIN I know little about, but I snagged their Leading Stolen Horses LP in a bargain bin somewhere in Oklahoma decades ago (probably Shadowplay, thanks Ruth) and this is the first time since then that I have seen their brilliant goth/post punk anywhere else. I think that BABY ASTRONAUST were from Minneapolis - goofy art punk shits. DICTATRISTA and CRASH BOX from Italy both contribute tracks (the former unfortunately suffer from rather poor quality, but the songs are great), while Southern California kids UNIFORM CHOICE get into the mix with two tracks from their 1984 demo. West Germany's ST-37 offer up killer fast female fronted punk songs that just might be the best on the tape, while Northern California weirdos ASBESTOS ROCKPYLE (whose members were, I believe, responsible for this comp?) and ARCATA BOYS CHOIR throw in some drug addled psych punk tunes. The tape is rounded out by more weird sounds from DOC  WÖR MIRRAN (think CHROME and you'll be in the neighborhood), a mesmerizing edgy and angular track from BRAVE NEW WORLD (whose Initiation 12"is still one of my favorite random purchases ever), and early recordings from a band called FAITH NO MORE - a band that went on to make a few records that a few people purchased. These folks proved on their virgin voyage that they were very adept at assembling compilation tapes, and went on to release several different and diverse compilations for public consumption. Random arty punk and important but unheard bands mingle harmoniously with established international hardcore acts and it all makes sense. This one will ease the pain of your daily trials and tribulations, like a foot massage for your mental ears and your aural soul. Seriously. Try it.

It's kind of weirding me out how much the first Faith No More song could have been on the Heroin 12".

"early recordings from a band called FAITH NO MORE" = I'm downloading immediately. Thanks!

I really dig the first Faith No More album with their original singer [same singer as on these tracks]. I never could get into any albums after. It's really interesting to hear these two early versions of two of my faves on that first album. Thanks!

Wow, thanks! Finally someone posted this rarity! Keep up the good work!
De-sap

Thanks for this. I am enjoying it.