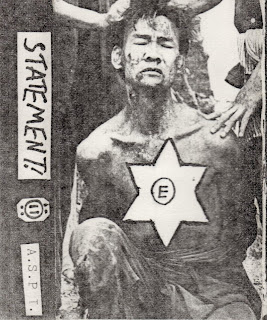 So I was having a chat with my pal Golnar yesterday, and we were talking about the lyrical content dished out by most current bands (to be fair, our conversation took place via text message, while I was at work and she was in class...how very adult of us both). What has happened, we both wondered, to the days when it seemed every punk band was political and/or confrontational...or at least thought provoking? What happened to a time when we read lyric sheets and learned something about the world, or maybe we were just inspired to learn, but it made us think. Maybe those days are gone...maybe the internet makes punk politics redundant...maybe we are just older and more worldly now and if bands were to sing about the long term effects of colonial oppression in Africa we would both just chuckle and say "yeah, I read that in the Times six weeks ago, young punk...get with it!" But who is singing about that? Who is yelling about something other than their scene? Who is screaming about something more abstract than war - which I think the punks have long since established is a blemish on the reputational face of humankind? I was thinking about this conversation, which took place with thumbs instead of mouths, while I was trying to choose a tape to rip when I got home from work. I dug out a UK box that's been buried for a while since there's some tape in it I'm supposed to send to some dude and I came across this: 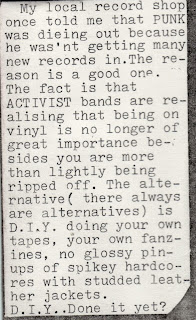 And I thought about punks and politics and how much the punks in the UK seemed to have the shit dialed in....a decade after punk started to rumble, it had truly evolved into a community of activists and radicals genuinely hoping to evoke change, both social and political. Fortunately for our modern ears, in many cases they also made excellent music. The irony in this post is that the lyric sheet heralded in the insert of this most excellent STATEMENT rehearsal tape, their first release, is nowhere to be found. No lyrics, no song titles, no subject matter, nothing but a notice that the cassette should be of the highest quality (it is) and that the package should include a lyrics sheet....oops. But the point is still valid - a healthy percentage of the records I buy today don't even have the promise of printed lyrics, much less actual lyric sheets, and many of the ones that do are full of words lacking ideas that required anything approaching originality or thought. I am as guilty as any...I just miss feeling like it mattered, even if those feelings were foolish. 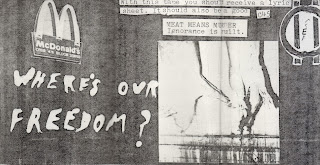 These songs were recorded to four track, they are awesome, and they fall somewhere in between UK anarcho and mid tempo post punk...there's one part that bizarrely reminded me of EDDY CURRENT SUPPRESSION RING and inspired me to pull out a particularly excellent tape for tomorrow.

Great post Wizard. You know my stance. I wish there were way more lyrics that involved concrete ideas of what I think a lot of us still believe in. Lyrics about dragons and zombies can be rad, but they also remind me of bands like Rush and Styx and Kiss, which I thought punk was supposed to be getting away from initially. Oh well. I'm guilty too, but I do appreciate always opening up a new record and finding tons of cool artwork that clearly had some time and creativity put into it. And awesome, well thought out lyrics to go along with it. And maybe even lyrics that touch base on new ideas. A//E

I would have to agree...the spreading of ideas has some how been pushed to the way-side and a sort of generic dissatisfaction has taken over...even though now...more than ever...in the world, and our own country, things have gotten somewhat out of hand...life isn't all bad. Some things need to be changed and rearanged...given a new direction, but how many songs about suicide and depression and friends screwing you over do we really need...I was attracted by the idea of ideas and that, I think, that is mistaken for beliefs and gets muddy. Ideas andproblem solving are chalenging and everything gets hopeless, but the punk rock is suppossed to smash the hoplessness and spread some light and not wallow in it....Great blog...Thanks!

This demo is fantastic!! I recently unearthed my copy and can't believe I had forgotten it for so long!!

And I have a request. Something I once had, many moons ago, and have been looking for for about 17 or so years now.
(LBC's)Body Count's What We Cant Cure demo from 83 (i think) and/or any live shows.
Cheers
Sean
NBSF

Its funny Robert- Stan and i were discussing this very thing the other day. More specifically about how many bands there are today taking HEAVY cues (sometimes just blatant copies) of older bands' sounds, lyrical topics, imagery, etc. Like some kind of fanaticism- but what's missing is the passion and true personal expression. Like, the UK anarcho early 80's thing for example was such a time and place kind of movement, with an agenda. And though I like the music that some of the current bands are creating, it kind of misses the point if there's no passion behind it. I'm much more inspired by a person/band/artist who's doing their own thing, that you can tell is REAL.
Anyhow, I'm gonna check out this tape now :)

Interesting discussion. Statement was actually a one-man band by a guy called Rat. He also did a split 7" and split LP with The Apostles. There's also a 7" on Vegan Reich's Hardline Records. You can state that Statement was pretty hardline but not as ridiculous as Vegan Reich (who were quite homophobe). And that's probably the reason why bands don't sing that much about those topics anymore. People got bored by other people telling them what to do, eat, wear and even think. I remember the 90's being pretty over-the-top PC and this gave a reaction of anti-PC burger-eating punx. Vegans who treat vegetarians as 'traitors', feminists who think that every man should be castrated. It all didn't help 'the cause'. It seems that for some people the more radical they are, the more intolerant they become as well. Even those sentiments were found in the early 80's anarchopunk scene (see the Kill Your Pet Puppy site). 'Making Punk A Threat Again' was a cool idea back then but it's never a good idea to try to turn it into some hardline political vehicle.

thank you robert, zhollows, matt, curious, for sharing. it means a lot to me to read.

Punk means a lot to all of us. The sounds, to the words, the community...all of it. Cheers!