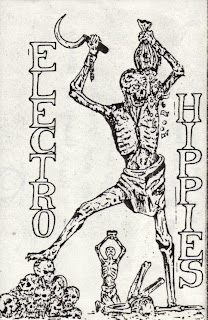 After an excruciatingly long intro and one track that leans more towards the crossover side of late '80s thrashcore, ELECTRO HIPPIES dish out heaps of killer fast hardcore on their second demo. A few added bells and whistles from the band came with this tape: One track from the split LP with GENERIC as presented on Radio One comes before the nine track demo, and versions of "Vivisection" and "Life" from the third demo come after it (the latter with a nice note requesting that these versions not be copied for anyone...I hope that it's OK by now to share these tunes). Essential UK political thrash - if you don't know already, then you need to start learning.
ELECTRO HIPPIES 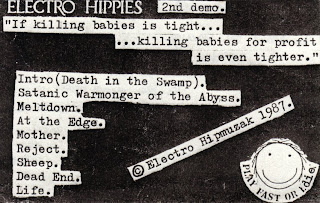 And just in case you need more, these dudes were nice enough to throw part of a January 1987 live set onto the flipside of this demo, so here are ELECTRO HIPPIES having a well cool time.
LIVE JANUARY 22 1987 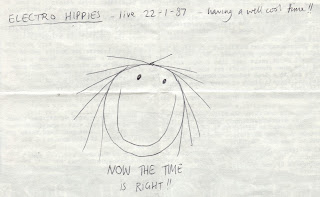 nice, already had the demo but not the live stuff cheers

that was me, wife hadn't signed out :)

Memories...I used to have this tape as I used to write to Simon, the original drummer. I probably taped over it with something so I could listen to it on my walkman.

Haha that live stuff was recorded on my 11th birthday. Awesome.