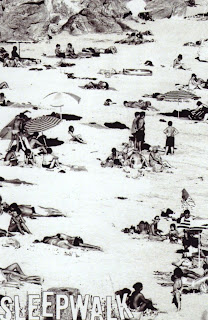 I received a compliment Saturday night. After we played in Portland a friend told me that it was good to see a hardcore band - not mysterious and dark, not obscured by feedback and white noise pedals, not obsessing on bygone genres and watered down mantras...just a band going all out and playing hardcore punk. The compliment was appreciated, and I would like to extend the same to Chula Vista's SLEEPWALK. There are hints (subtle, and likely accidental) of '90s San Diego in the dual guitar attack (this is a good thing), but this tape is just hardcore and it rules.
SLEEPWALK
Thanks to Travis, Jensen, Matt, Ken, Rick, The Morgue, Black Water and The Hub for making last weekend's jaunt a fukkn killer. I look forward to more Northwest jaunts in the future.

Email ThisBlogThis!Share to TwitterShare to FacebookShare to Pinterest
Labels: hardcore

awesome to see chula vista represented here. i may be an old man now and have not lived in cv for over a dozen years, but it's good to see these young kids from cv raging away. only seen 'em live once but they are a sick band (and cool kids).