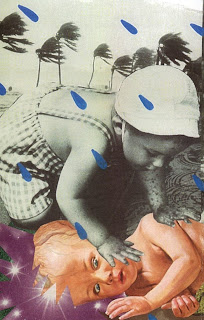 I got a couple of tapes a few months back from Tony/KINIT HER, but I keep putting them off because the time never seems right. These are deep and inward sounds that flow into you, instead of just to you, and finally, today, they seem to fit my head space perfectly. The deluge of rain and cold has finally started to wear down my spirit, a spirit that is already pathetically weak compared to my friends and loved ones who have shut down the capital city of my former home state for the last week (RAINDRINKERS are from Madison as well, no real coincidence I suppose). I was accosted on the bus yesterday by a 50-something-year-old autistic man just over 5 feet tall - his name is Tommy, and I worked with him fifteen years ago at a restaurant downtown...he remembered me instantly, even though I was clean shaven the last time we saw one another (anyone who knows me knows that this means we must have last seen each other quite some time ago), he hugged me, told me he misses me, and said that he quit the job we shared because his co-workers after I quit "treated me bad" and that they were "ugly people" inside, while he pointed to his heart. After I left the 14 Mission (with Tommy waving enthusiastically and shouting good bye across a packed bus), I was waiting to board a 24 Divis when an elderly woman much shorter than Tommy said "take...me...?" and held out her arm. The bus driver was on his phone and hadn't bothered to lower the hydraulics on the bus, and this woman was trapped, unable to disembark, holding out her arm so someone could help her off the bus. I did, it took less than 10 seconds, the smile with which she thanked me would melt the heart of the fiercest man alive and then she shuffled off into the cold rain. I was soaked, I was cold, and both encounters were racing into my thoughts...not through my mind, but into it. An inexplicably powerful stint on public transportation...and this RAINDRINKERS cassette could have been the perfect soundtrack for the whole afternoon. Dark but pleasing sounds with strings and piano, this makes you feel like you ARE the movie.

This is for all of the people that are stronger than I am.

Going back to Madison on Tuesday for the Assembly vote! We will keep you updated. The Repubs are continuing to sound desperate and idiotic. Maybe this will finally destroy the GOP??? One can only hope!

OH! And thanks for the post. Amazing thoughts, amazing words, and amazing sounds.

i love you, robert. and to call your spirit pathetically weak really does you a disservice. your spirit has seen me through my absolute hardest times and lowest points, and i cherish you for it. Wisconsin misses the Collinses like you don't even know.
xoxo