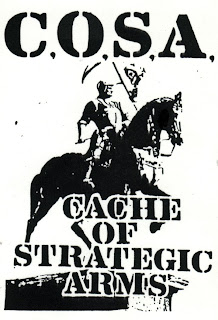 For the third time in less than a week (and the second day in a row), I offer you no song titles and little background information on the band. C.O.S.A. were from Kagawa prefecture (Takamatsu-City) in the southern half of Japan, about halfway between Osaka and Hiroshima, but still a bit out of the way (in case you needed a vague and imprecise geography lesson). Musically, this is guitar drenched Japanese hardcore that will fit in nicely with the stuff that is commonly referred to as Burning Spirits (though that moniker should be applied to a group of friends who tour together and not to a style of music, but it's far too late to try to impose that distinction at this point). Metallic guitars shelling out gratuitous leads, everything is just slightly out of tune so that it makes your ears a little upset, and those brilliant gruff Japanese vocals that keep you listening long after you've forgotten that you didn't like heavy metal. And if you already liked heavy metal? Oh...then this is going to be an easy sell.

NO STATIK are in Portland tonight at Black Water. LORDS OF LIGHT, SALTED CITY and RAW NERVES are playing too. It will be awesome, but it will be more awesome if you are there too.

Thanks! Good band. They also had a 7" that's pretty cool. Some members were in Effigy later on (and now Axewield).

EVERY album by C.O.S.A. is pure Awesomeness! They even have some trax that are VERY close to POISON ARTS' metallic solos and great vocals. So damn sweet...


you should repost that,its sweet!
thanx