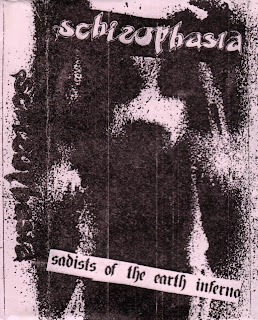 It occurs to me that this might be a rather pointless post (as opposed to all of the other ones, that are completely essential) since fans of the raw blown out UK82 meets Japan distort assault that Canada's SCHIZOPHASIA have perfected are probably already familiar with the band and their numerous demos. This is a total earfuck massacre, but underneath the mess are fucking great songs, and they play them in a manner that pays homage to the past without aping it...these kids are on another plane entirely, just check out the 2009 demo if you have any doubts. Sadists of The Earth Inferno from 2008 is the hardcore attack, and the flip side of the tape is the 2009 demo which is just harsh and brutal noise. There are tracks listed, but it would have been foolish for me to try to separate them, so one 10 minute blast is what you get. After five demos (these two are numbers 4 & 5), SCHIZOPHASIA finally went to wax earlier this year - SMRT still has copies, and I recommend it fully - after working the kinks out on cassette for years, it seems logical that the first vinyl release would be a stunner.

SADISTS OF THE EARTH INFERNO + 2009 Demo