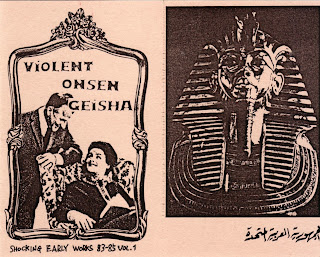 Everybody knows that the Japanese do noise really well, right?  If you want to throw a little 'weird' into your noise blender, then by all means start looking to the island in the East (which is really West from my house...semantics).  I cannot write about VIOLENT ONSEN GEISHA with anything approaching authority, I can merely pass on rumours.  Perhaps this artist is the work of Nakahara Masaya (this seems likely), but perhaps there were others involved on various recordings.  Perhaps this cassette release really does compile early works from VIOLENT ONSEN GEISHA (83-85, according to the cover), but perhaps that is just a ruse and/or hoax.  I can say with some certainty that Rolling Stone magazine selected their 1996 album Nation Of Rhythm Slaves as one of the top 100 Japanese rock albums of all time (MERZBOW collaborated on this release).  What I can say with complete authority is that this 46 minute cassette is a brilliant collection of noise, manipulated field recordings, found sounds and simple fucking weirdness.  The tracks lull me into a sort of numbness, but the appearance of pop music, spoken Japanese and English, movie audio tracks and other recovered noises all cut and chopped to pieces and then spliced together becomes more than a little unnerving (mission accomplished). I could not tell you for 100,000 Yen how I came across this tape, but however wasted I might have been, I am so very glad I brought it home with me,  This is the perfect background to an odd and frustrating day.