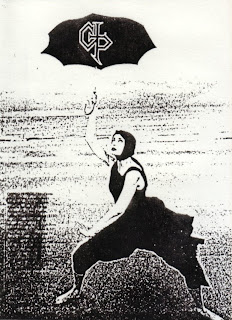 Florida was, I'm guessing, not the most awesome place to live in the 1980s.  This is probably the reason that this forsaken state brought us so many great punk bands (MAGGOT SANDWICH, ROACH MOTEL, HATED YOUTH, and many others).  I only know that GOTHIC PLAYGROUND came from Tallahassee, and were kicking around FLA from 1986 to 1988 or so, and graced us with one ten song demo tape.  Apparently what I know is fucking wrong, because THIS demo is only six songs long, but I love it no matter its origin or duration (with the exception of the track "Dilemma," which claims to have been written by GOTHIC PLAYGROUND with HR from BAD BRAINS...this shows that HR had enough time in the late 1980s to write shitty songs for BAD BRAINS and still had enough time leftover to contribute a turd here and a turd there for other bands as well).  Overtly political (hooray for Florida!) female fronted reverb drenched punk that leans ever so slightly to the kind of rock that open minded college students might have loved back when I was a yungun...I mean the good kind of college rock, like SUPERCHUNK, or the first R.E.M. record, or the DINOSAUR record that was on Homestead...the stuff that wasn't punk but was still pretty damn good, you know?  If I've already lost you at this point, then send me a copy of Cows And Beer, Version Sound press (since you weren't paying attention, I figure it can't hurt, right?), but if you are still reading dutifully along, then here's the GOTHIC PLAYGROUND demo:

Having lived in Florida throughout the 80s I can attest that it was not the most awesome place to live and ranked somewhere after prison or the moon. Yes Roach Motel were awesome, Maggot sandwich not so much. Never heard of Gothic Playground. There was a thrash band called Violent Playground. I guess playgrounds are a Florida thing.

could this be reupped?

Many thanks for putting this one up again - I really enjoyed it.

Ya know, you decide to do a Google search on your lunch break and "viola!"
First off, this wasn't a demo, but a second "album". The first (vinyl)left us broke and without a drummer or singer. Tracy took the role of lead vocals and we found a brilliant new drummer named Brian O'Donnell. We recorded these songs in a Tallahassee studio that was part of an auto body shop in one evening, if I remember correctly. As with the vinyl album, there were no overdubs or mixing. We just played the songs and this guy mixed it live and recorded them in a two track. In retrospect, GP was the one of the funnest time of my life. I'm glad to see items like this pop up every now and then.