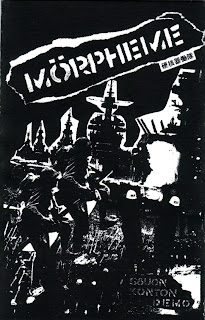 If you live anywhere near The Bay Area (that's the San Francisco one, which is the one where I live), then the 2008 arrival of MORPHEME must not have gone unnoticed to you either.  At their show at Thrillhouse with LIMP WRIST and LEBENDEN TOTEN, everyone I knew was leaving the room with wide eyes mumbling "what just happened?" and we spent the next year seeing MORPHEME assault us with their wall of noise nearly every week.  Total Japanese crasher crust, executed flawlessly.  They seemed to play every show that I attended or played from spring '09 until singer Moto returned to Tokyo a few months ago, and I consider myself lucky.  MORPHEME kicked the scene here in the ass like no band I can remember, their energy and attitude was a serious wake up call to lots of us who had been sitting on our hands for way too long.  There's a completely devastating EP due soon on Prank Records, and obviously I recommend it.  These demo tracks were recorded by guitarist Daike, and are raw as fuck, get into it.

**if you live anywhere near The Bay Area (the same one I mentioned before), the you should come out tomorrow to Sub-Mission (18th & Mission, SF) to see Japan's mighty D-CLONE, Portland's noisy NERVESKADE, DOPECHARGE from the lower Haight, furious FUNERAL SHOCK from the North Bay, and new band VACCUUM (featuring MORPHEME guitarist, PEDESTRIANS bassist, YELLOW EYES bassist, and SUICIDE BOMB bassist...the last three not all playing bass, by the way**
Posted by the wizard at 9:21 AM

Morpheme have a split with D Clone which I will be grabbing at the show on Friday. Hope I can get these 3000 studs in my leather by tomorrow night.

you HOPE you can get one! the US copies of that split disappeared super fast. hopefully there are still some left at the tail end of the tour. if not, i'll get you one in japan, because I like you. start painting those pants on now!

Heyyy Robert, what's up? Finally some noise from these dudes I can jam on my headphones. They ran out of tapes by the time I ever got to see 'em. Oh, what ever happened with those Suicide Bomb demos? Would love to hear that thing.

I'll put up the SUICIDE BOMB shits eventually...and hopefully there will be VACCUUM demos in the relatively near future!