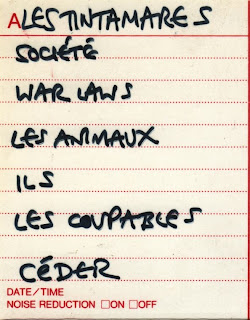 Here's a home dub of a demo from some French street punks.  Actually, I just assume they are French from their name (which means, roughly, "The Hubbub") and the song titles which are mostly in French, but I suppose it's possible that this could be an unearthed gem from some former French colony or protectorate like Senegal or Algiers or perhaps Guyana?  Possible, but rather unlikely.  Maybe they are Belgian. LES TINTAMARES take a pretty rudimentary approach to be sure, but here at The Escape, we've never let lack of originality prevent us from having a good time.


LES TINTAMARES
Posted by the wizard at 7:02 AM

classic french jem not the most orginal but still good

Les Tintamares were a 5 piece anarcho/street-punk band from the western suburbs of Paris formed 1983 (? I think), very much into vegetarianism and animal liberation amongst other things.

They recorded the above demo and used to rehearse at RP Productions in Nanterre (home of many a punk band rehearsals in those days) where this was most likely recorded.

They moved to London in October 1987 where they played a few gigs at the Old Queens Head, 121 center and other places.

The band had stopped being active by 1989 and then moved away their various ways around the end of that year (a bunch of them moving to Thailand).

Thanks for this I had lost my copy yonks ago.

I didn't know this band at all, in fact it's totally unknown here In France. Thanks for the informations! Is it possible to reedit the download link please?