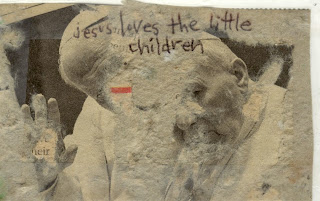 ARTHUR STONE was the 1990s project created and executed by San Francisco artist Allan Burris.  These are dark and uncomfortable compositions that reflect perfectly the time in which they were made, and deep in the recesses of 109 Cypress, time was often dark and uncomfortable.  Harsh guitars drone and howl beneath walls of tape hiss and muffled moans...five tracks take up 21 frustrating minutes.  I don't know that Allan ever "released" these tracks, he just created sounds in the small hours of the morning and dubbed copies for his friends.  Tuesdays are hard sometimes.

Holy Balls!!!! I forgot about this.

Lets get ready to mumble!!!!

oh shit, thanks for posting this little oddity, i have tons of allan's art but none of his.. uhm.. music. actually i doubt he even has this, i should burn him a copy!
oh yeah i have some human beans and skirtheads demos i could copy for you if yer interested.

please pass a copy along to allan when you see him...is he back in SF? I wish I had more than just this tape, these drones are truly (if accidentally) brilliant.

and yes, I'd love to get beans and/or skirtheads demos...funny how the stuff I sometimes think about the most is the stuff that would have been the easiest to get, but at the time it seemed like there would always be plenty of time. But there really isn't ever enough.

allan's back in sf and doing great, off the shit, hangin out with summer and painting again, check out his new mural in clarion if yer passing by.
i'll copy some tapes for you but i see you so rarely that i don't know when i could get them to you, maybe someday we could meet and have a beer food or something.
and what you said there is all too true.
p.s. i just found a tape in a box that says "hot new fuckface" and has sticker pictures of you and karoline on it. it's a rough mix of the album and i think you gave it to clancy a million years ago.