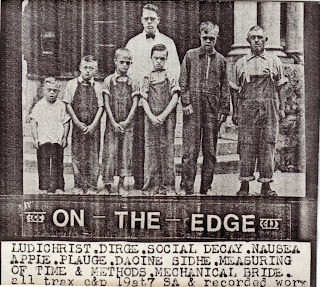 Another Friday, and another compilation tape.  This one is courtesy of the Smash Apathy fanzine from New Jersey, circa 1987, and features some fucking killers of late 80s NYC hardcore.  The LUDICHRIST tracks are pre-pure metal years, and starting any comp off with "Most People Are Dicks" is OK in my book.  Early demos from NAUSEA, A.P.P.L.E. and SOCIAL DECAY as well, but the highlight of side A is the appearance of DIRGE (the Jersey DIRGE, not the UK one), stripped down ripping east coast hardcore, I would fucking love to hear more from these dudes.  Side B is takes a decided turn down Weird St., and the hardcore is completely absent.  THE PLAGUE starts off with some female fronted death rock; DAOINE SIDHE are either really late anarcho punk or really early riot grrl, I'm not yet sure which; MEASURING OF TIME AND METHODS offer the best tunes on this side, dark and earthy dirges reminiscent of CABARET VOLTAIRE in their most excellent early days; and MECHANICAL BRIDE closes the side with two live tracks.  I like the variety between the two sides, fucking killer that someone would put LUDICHRIST on the same comp as some minimal electronic shits...good idea, dude from New Jersey!

i like to make sure there's a little something for everyone. this way you BOTH get something out of the contents, she gets killer music, and you get to hate it! after further listens, the MEASURING OF TIME AND METHODS tracks really fucking rule. If she likes dark minimal shit like that, send her on over to the Tape Attack blog, holy fuck does that dude post some incredible music!
cheers===

more dirge for you