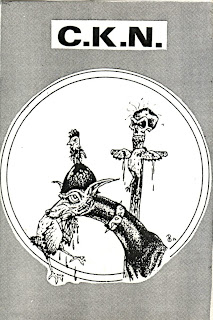 Fuck me if this isn't some of the best dutch hardcore I've ever heard. 19 songs in 25 minutes, from 198something. The drum intro to "Dixan" would make the whole tape worthwhile even if everything else sucked, but instead, it just makes for one of many highlights. Others include: "Sex Met Een Pop," and everything the drummer does. If I were a greater man, I could tell you the whole history of this killer band; what other bands they went on to play in, great legendary shows they played, I would have links to photos and flyers, to other bloggers who posted other demos and rare, impossible to find singles and rehearsal tapes. But, I am not a greater man, I am a dude with tapes. About half of these tracks appeared on Volume 2 of the Holland Hardcore double LPs, but whoever graced us with those records is apparently even a lesser man than I, because he could barely be bothered to include the track list, and even that was so poorly reproduced that it is almost illegible. So here's the whole demo (minus the song "CIA_BVD" because it's not on my copy, even though it's on the track listing...stupid punks), and the cover that goes with it. As a side note, I think I might want to be a "Muurpunk," so if anyone knows what that is, please te me.

Hi could you please re-upload The Cause, all files is corrupt. They are .aiff and can not be played nor converted to mp3 by any of all programs i've tried to use

Seen a reunion of them about 10 years ago. Lead singer Pim was also in Boycot for a while.
Muurpunk should translate to Wallpunk. Don't know what that could mean but CKN (Creative Chicken Fuckers) weren't a 100% serious band.

Muurpunk was directed towards the punks who did not move at the CKN and other punk gigs.