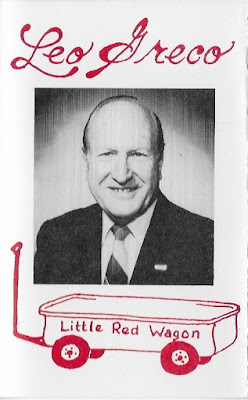 Imagine you're a radio personality and regional country/polka star in 1960s Iowa. You crank out a few records and folks...well, they know who you are. Fast forward to the 1990s and you're old(er) and your legacy has been all but cast aside. No one under the age of 75 gives a shit about polka, and the classic swing you know as "country" has been replaced by Alan Jackson and Billy Ray Cyrus. So, what do you do? How do you stake your claim on your own history...how do you leave your mark? Obviously, you self release your debut LP on cassette so some other irrelevant fellow past his prime can pick it up in a thrift store in Utah for 49¢ a few decades later.

LITTLE RED WAGON: REQUEST TIME WITH LEO GRECO
Was it worth it? Absolutely. The guitar (most notably on "Wheels") has a Billy Mure caliber pep, the occasional horns add an indescribably Midwest drunken lumber, and Greco's second tier croon is smooth and endearing. Half dollar well spent - legacy secured.
Posted by the wizard at 10:51 AM

Leo was known for his antics with groupies, particularly this one whose name I believe was Wanda Skutnik, who has lost part of her hand in a farm accident, and lived in one dairy farm after another in Minnesota, right up at the border with Manitoba. She's believed to be the very first "Plaster Caster," though she wasn't affiliated in any way with Cynthia "Plaster Caster" Albritton, who seems to have gotten the idea to make casts of famous Rock Stars' penises entirely independent of Wanda. I guess it was an idea whose time had come.

Anyway, Leo was famous throughout 'Cheese Country," or "the Cheese Trail," being Wisconsin and Minnesota. The cast depicting Leo's 'junk,' astonished everyone who saw it, for its size and girth, and though people don't mention it, that plaster cast of his genitalia led to his very first recordings to get airtime on the radio, and the rest is history.